Rich Presence (RP) is brief overview of what active players are currently doing in their game. To have RP in a game you need a Rich Presence script, which is created by Developers. The script checks the player's game memory and reports the values of certain addresses with definitions assigned by the Developer such as which stage the player is on, how many lives they have, if the game is paused, what game mode they are playing, what the player has accomplished, etc. This information is reported back to the website once every two minutes.

A good rich presence should inform other users how far into the game you are (level/ town/dungeon), and give an overall sense of how the player is doing (score/remaining lives/character level). Additional details may be useful, depending on their context within the game. Try not to go overboard with the detail though. Other players don't care what you named your dog, or need to know how many bullets you have left, especially since it only updates every two minutes. Additionally, the more fluff you add to a rich presence display, the more diluted the important information becomes.

Example of RP in action: 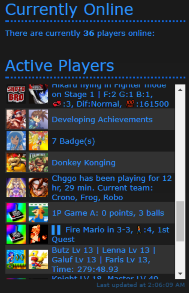 To see the RP live in a game click on the RetroAchievements menu in your emulator and then click on Rich Presence Monitor. A small window will show you your active RP. (Good for debugging)

The best way to understand Rich Presence is to look at various examples in game, look at the addresses used and look at how the text is displayed in the Rich Presence Monitor and on site.

The Rich Presence script for a game can be found under the development section on each game's page: 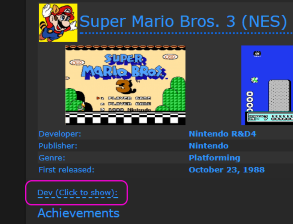 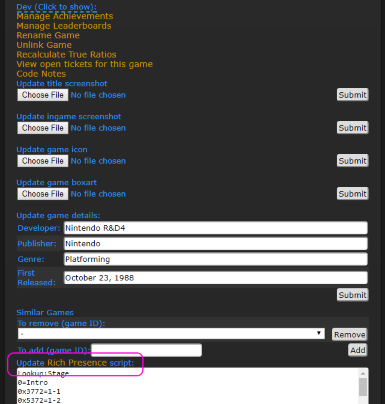 It breaks down into a series of Lookup objects, Format objects and one Display object.

A macro converts a value into a user-friendly string. Macros are placed within a display string and will be replaced when the display string is evaluated. A macro starts with an @, then the name of the macro, an opening parenthesis, the value to evaluate, and a closing parenthesis.

@Macro(0xh1234) says read the byte at $1234, transform it using the Macro macro, and place the result in the display string where the macro had been.

Parameters for each macro are constructed using a value definition.

When a display string references a Lookup, it's value will be located in the table and the associated text will be displayed.

NOTE: Values in the Lookup should be in decimal. If you want to use hex values, include a 0x prefix. (i.e. 0x12=Eighteen)

You can also specify multiple values for a single text string:

Begin with Format:, then the name of the Format converter. On the next line, give FormatType=, then one of the following:

As of the 1.0 version of the DLL, you can use predefined macros for the most common formats. The following macros are now implicit:

Display is a string that gets shown in the 'Active Players' box on the front page and the 'Last Seen In' section of the player's profile.

It is built by replacing any macros in the display string with text from a Lookup or formatted values from a Format converter. Each macro is identified by a single '@', which is followed by the name for the Lookup or Format (case sensitive!), and immediately after, in parenthesis, a value specifying what to send to that Lookup or Format object.

This means use the Lookup or Format that's called Powerup, and give it whatever 8-bit value is in the address 0x756. After converting, put the result in between "Using " and "!".

NOTE: Lookup/Format names are case sensitive and must exactly match the usage in the Display string: @test(0x1234) will not find Format:Test

NOTE: Lookup/Format definitions cannot contain spaces before or after the name. @test(0x1234) will not find Format:test or Format: test

The conditional phrase supports all of the previously mentioned address accessors as well as AND (_) and OR (S) logic. Note that OR clauses still require a 'core' group, just like achievements.

Pro-tip: Conditions can be created using the achievement editor. Once you have your condition defined, use the Copy Def button to copy the achievement definition to the clipboard so you can paste it into the rich presence script.

When using lookup and format objects @object() it's possible to combine and perform calculations. Macro parameters are value definitions, so you can use multiplication, addition, and even some logic to generate values that aren't directly available in memory.

You can without doubt use these symbols in rich presence.

While making Rich Presence, devs need to be careful that they are communicating clearly. If you are using non-standard symbols they will make sense to you but could be entirely confusing to others. When using non-standard symbols, check them with someone else or a few people to see if the symbols you use make sense. If they don't, use better symbols, use text or use symbols alongside of text.

For custom unicode/emoji ShapeCatcher is an excellent resource, you can draw what you're looking for and an AI will find similar matches. Just be careful to not use unicode that too obscure, as they don't all display on all systems. 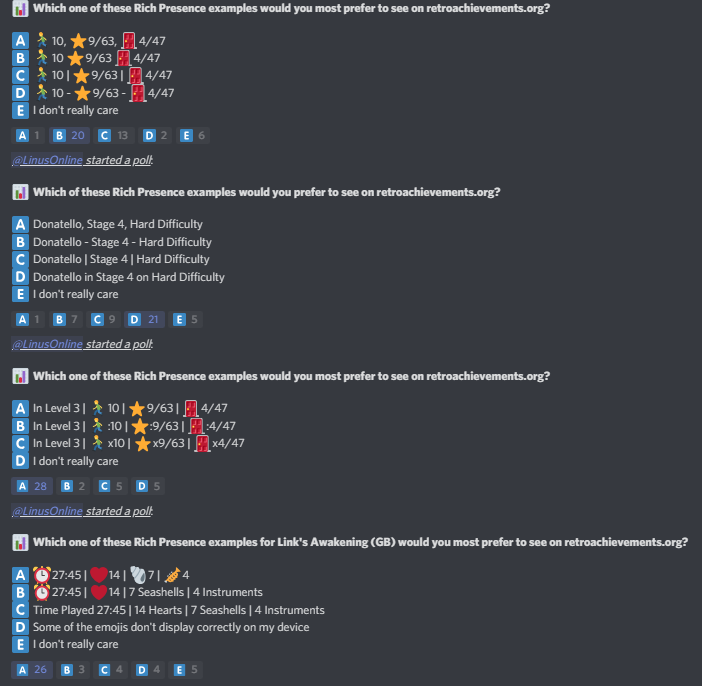 The Rich Presence Monitor (openable from the RetroAchievments menu) reads this file and shows the current value every second while the window is open.

If you make changes to the XXX-Rich.txt file, and reselect the menu option, it will read the new changes and allow you to immediate test them without applying the changes to the server. Continue to make changes and reselect the menu option until the script is behaving as you expect, then copy the contents to the server page to make it available to everyone else.

NOTE: The XXX-Rich.txt file is overwritten with the current server data each time the game is opened. As long as you still have the file open in an editor, you can always save your changes over the updated file after reopening the game.

This issue happens sometimes when a Rich Presence is created in the <GameID>-Rich.txt file in the RACache>Data folder. In this case the issue can be fixed by adding an empty line at the start of the file.